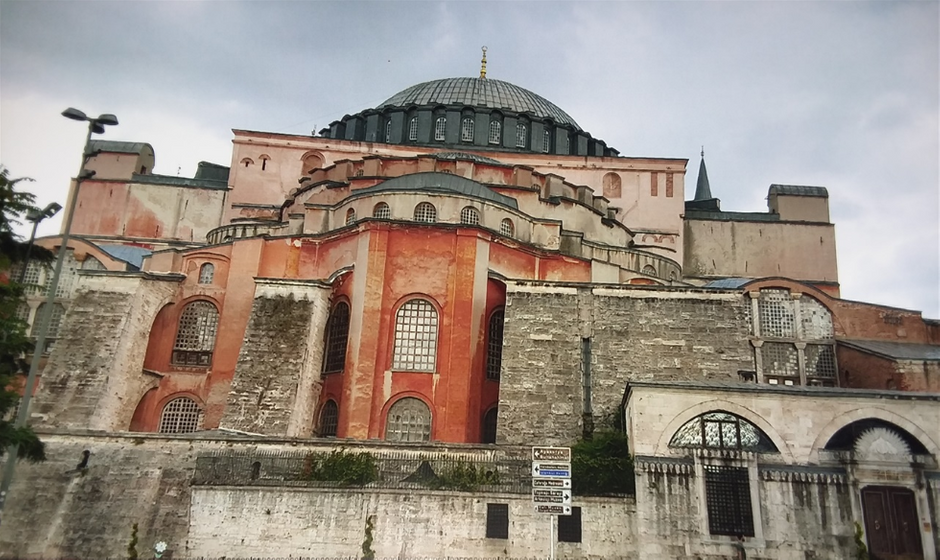 Out side of the Hagia Sophia in Istanbul on a rainy day. It was only a light sprinkle by the time we got there so we had no problem with the moisture. Hagia Sophia is magnificent. It is on the opposite end of a well maintained park that used to be a hippodrome in ancient times from where the Blue Mosque is located. We were able to walk here in only 10 minutes time, up a narrow cobblestone road that lead us up a slight incline. Our hotel (Basileus) was about half way between the former hippodrome and the Sea of Marmara. The neighborhood is the Sultanahmet area of Istanbul which is the southeast portion of the European side of Istanbul. Cross the Bosporus Strait and you will be on the Asian side of Istanbul. We loved staying in the Basileus Hotel because it was really cozy with a front desk which was just a desk where we sat across from the proprietor who checked us in and conversed with us in a friendly, familiar fashion. The hotel is at Küçük Ayasofya Mehmet Paşa 1. Oh, and Ayasofya is the real way to spell Hagia Sofia. We paid less than $50 a night for a very nice hotel stay. The breakfast buffet was one of the best I have ever seen and we even had complimentary cookies and breads that were home made. They were on a table in the hallway between the living room like lobby and the rooms. There was also complimentary tea in a large dispensar on the table. The former hippodrome is now a very well maintained park or square called the Sultanahmet Square and the Obelisk of Theodosius stands there. Sultan Ahmad Maydan Fountain is a little further up the walkways and then the Ayasofya Müzesi (Hagia Sophia museum) will be the next destination you arrive to. There are many other sites around the square and I recommend that all visitors take a whole day just in this lovely neighborhood. Just be careful not to be lured into a carpet shop to drink apple tea and look at carpets because the sales pitches may come next. Actually, the sales pitches will come so enter only if you really do want to buy a carpet or rug.