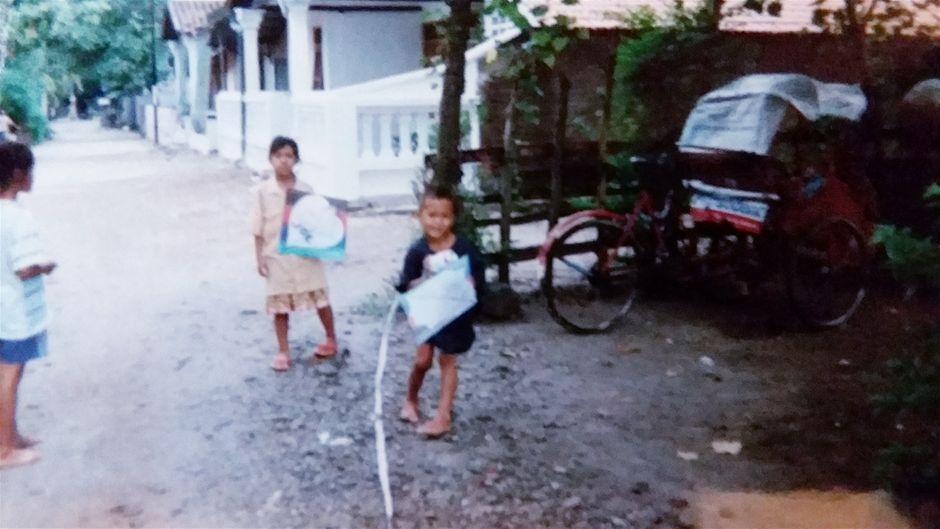 Penang is a wonderful place to live. I kept putting off my departure because it is such a fun island to explore with beautiful beaches and a great cultural scene in Georgetown.Penang to MedanI looked around for an office where I could buy a ticket to take a hydrofoil boat across the Malacca Strait. I could not ask anyone where I was staying for directions because I was staying in a temple and the people of the temple did not want me to leave. So I used the guide book that I kept with me to find a tour office where tickets were issued to cross the strait. I was directed to a wide, clean intersection (most streets in Georgetown were clean) where several tour companies are located. I stood there looking at the several tour companies that all sold tickets to cross the Malacca strait. I just had to decide which one to enter and I had not much to help me make my decision because they all looked as friendly and honest as the next one. After a few minutes, I randomly entered the one that was closest to me. The prices of the ticket did correspond closely with what the guide book said they should be so I quickly did my business there and walked out with a ticket to Sumatra, Indonesia. The hydrofoil boat was fairly comfortable as one can sit inside, away from the spray of the splashing water or one could sit outside in the breeze and spray. One does have to endure the bumps and thumps of the boat upon the water when the waves get rough. The trip mostly went well as I learned to cushion myself from the bumps and thumps and I did not feel sick in the stomach which was one my fears. It took about 4 hours to cross the Malacca strait and I sure did feel exited when it was time to exit the ferry, or hydrofoil boat. My excitement grew as I walked into the immigration building at Belawan Port. There was definitely some apprehension there too as I did not know how much Bahasa Indonesia I would need to speak while traveling through this country. It proved to be very easy to pass through customs and I quickly found myself on the other side of the building. I was immediately directed to a large, old city type bus that took us ferry passengers from Belawan Port to Medan. We were on a modern and wide road so the bus ride was fast and smooth although the bus seemed rather worn out to me. We arrived into Medan in good order although the bus was rather crowded and seemed like it would probably break down at any time. It did not break down and I was not too uncomfortable. This was probably because the people in the bus were all very friendly and smiling with the biggest smiles I ever did see. When we arrived into Medan, we all entered the station and I walked straight to the other side of the building to exit and look for a bus to Parapat. I was immediately surrounded by touts and taxi drivers but I ignored them at first. I started to walk down the street. This was the most crowded and chaotic scene I had ever found myself in. This was the first time I had ever been in the country and Indonesia definitely seemed more disorganized than Thailand or Malaysia. After about 15 minutes, I stopped walking and started to look around for a promising ticket office so I could walk inside and get away from the people around me. Soon afterwards, a short, fairly stocky man walked up to me and asked me where I was going. I decided to talk to him and told him Parapat. He told me to not worry, he will bring me to a good place to buy a ticket to Parapat. I knew that this was the type of tout that I should be avoiding but I decided to follow him and see what they would ask me to pay. When we entered the office, a large man approached me and we discussed the price to Parapat. I told him that the guide book suggests a price at least 50,000 rupiah less. The tout said that the price had gone up since the guide book was printed and I told him that it could be possible but not by 50000 rupiah! Since they did drop the price down to only about 20000 rupiah above the guide book suggestion (which was a couple of years old afterall), I agreed to pay and I had my ticket to Parapat. I would not pay the tout a tip (ongkos) because I knew I still paid about $3.00 above the correct price of the ticket. They directed me to a taxi and I got in right away while the tout was asking me for ongkos. I told him he could get it from the ticket seller because he got more money from me than he should have. As I watched the tout go back to the ticket distributor to tell him I did not give him any ongkos, I told the taxi driver to start driving and he did.