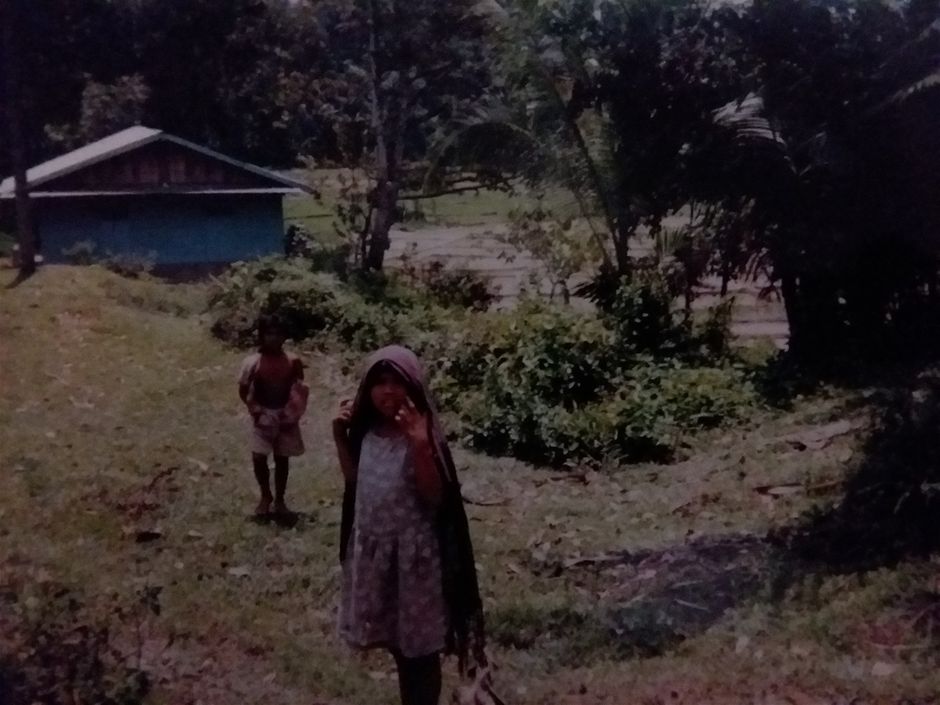 ON THE BUS BETWEEN MEDAN AND SIMOERA. In retrospect, I believe the young man who I met on the bus was named Rikson. He was going to Jakarta where he works to get environmental laws passed. But first he was to stop at a very small mountain village with only 2 roads and no traffic lights nor even a bank school or store. This was Simoera where his mother and 2 sisters live. Rikson told me that his family and the village are Christian and that I should go with him there and spend Christmas week with his family. I agreed to do so although it meant I would have to ride on the old, worn out, over crowded bus for another 2 hours. Rikson then went up to the bus driver and told him that I should be allowed to continue on to Taratung and the bus driver agreed to do so. We traveled to Taratung and got out there. We waited for the transportation up the mountain where the village Simoera is located. This is a very small village with only 30 houses,, maybe 35 wood houses. There are only two streets in the village, one running north and south and the other running west and east. I lived with Riksons' family for about two weeks. I ate in their home. I ate one time across the street because the neighbors wanted to meet me and see how much chili paste I could stand to eat with the rice. They fed me dried fish with rice and would add chili paste to it until I was sweating. Eventually, they had to add more rice to it because it got too spicy hot for me. One time I heard a dog whining and then it made a short, high pitched sound. Soon,Rikson and one of his sisters passed by where I was sitting in front of their house. I saw that Rikson was carrying a tray with a dead, skinned dog on it. The tail of the slaughtered dog was stiffly sticking up towards the sky. That is the clearest memory I have from that day. I also clearly remember not eating any meat that day even though they insisted several times that they were giving me chicken.We visited Lake Toba that is accessed by driving down the mountain via the one road heading north out of the village. The small fishing village of Muoera is located there. We also took a day trip to a logging village where Rikson did some information gathering. I did not ask but, since Rikson often spoke about illegal logging on Sumatra, I assumed that this was a site of illegal logging. I did not feel very comfortable there and was relieved when he said we must leave after only 30-40 minutes. We also had walking minstrels arrive into the village singing Christmas carols while arriving to each of the homes of the village. I assumed that this meant it was Christmas Eve since it was already sunset and if it were Christmas Day, they would have arrived in the morning. I gave a donation to the minstrels but a young boy who was a neighbor of Rikson, ran into the house with the money and came back out with smaller rupiah notes that he distributed around. After two weeks, we returned to Taratung to catch a share taxi to Jakarta.