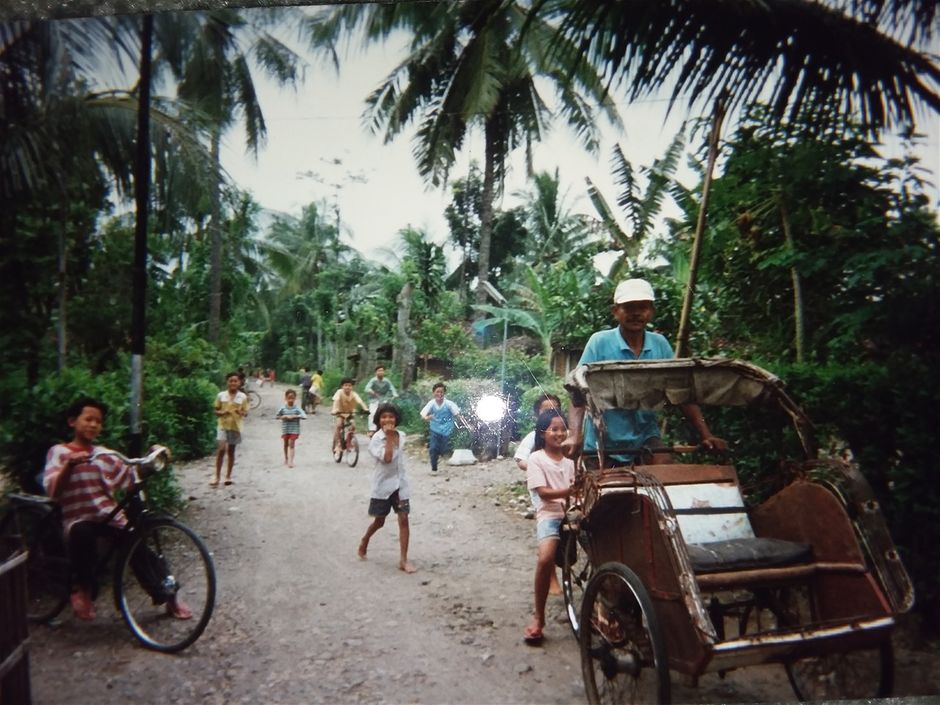 Here is another photo of an old photo that I took with a one time processing throw away camera that I typically used when traveling before we all started buying cell phones. 😄...Anyway:We were in Taratung now and we were waiting for a share taxi to load us passengers into the van for the ride to Jakarta. Then it happened!! Rikson led me to a white van and he told me to wait there while he arranged for our ride to Jakarta. While I was waiting I noticed a beautiful girl walking to the same van that we were probably going to travel in. After Rikson returned, we stood outside of the van for about 10 more minutes and then were told to get in because we were ready to leave. We must have already been fully booked because public transportation generally leaves when the vehicle is completely full rather than at a certain time. Amazingly enough, all three of us sat on the same seat. The beautiful girl sat between Rikson and myself. She would ask me questions and I tried to answer as best as I could with the small amount of Bahasa Indonesia that I knew. I did have a dual language dictionary that I used a few times to look up an Indonesian word that I did not know but needed for completing a sentence. I kept noticing her huge smile and when we stopped for a lunch break I watched her walk into the warung. She looked over and she had such a huge smile that I could see nothing else. The thunderbolt had struck. This share taxi had the destination of Jakarta and I had paid to arrive into Jakarta but I did not make it to Jakarta. The beautiful girl was going only as far as Padang Sidempuan and she gave me her address there. Once we arrived at the bus stop in Padang Sidempuan, she got out and she was talking to some people who probably came to pick her up. I saw her looking over to the van while she was talking to her friends when I decided to get out of the van and stay in the town so I could visit her. Her smile just captivated me so I had to visit her more. I said goodbye to Rikson and looked for the first nice hotel that I could find. I remained in Padang Sidempuan. Not only did I not get to Jakarta on that share taxi but I also did not get to Bali on ANY share taxi...COURTSHIP:I started to visit Farida everyday once I found the house where she was living. After about two weeks they told me that a man who is visiting a woman in this country is actually courting her for marrage. I thought that I may have to take a few days off from visiting Farida so I could think about that. I told them that I would be traveling for a few days so I could visit Bukitinggi. I also told them that I would return with some souvenirs. That is exactly what I did. I stayed in Bukitinggi for about one week exploring the city and buying several souvenirs for the family. There are towns on the other side of a large gorge that are known as silver smith villages so I went over to the other side of the gorge and discovered small houses with display windows that had hand crafted silver jewelry displayed. I bought a delicate silver choker for Farida and when I returned to Bukittingi, I bought a lot of small wood carvings for every one else.