This page features food that I have  enjoyed in different regions of the world where that food is most commonly found because it is usually indiginous to that area or has been developed in that region. Oh, and there will be several photos of Huevos Rancheros because it is my favorite breakfast and each New Mexican restaurant has its own version. I compare Huevos Rancheros in many restaurants but I am posting here only those I like the best and will eat again on a regular basis.

New Mexico has several traditional breakfasts. My favorite New Mexican breakfast is Huevos Rancheros. I think they were invented in southern California but I suspect they are more traditional in New Mexico. Just about every New Mexican restaurant that is open for breakfast will have Huevos Rancheros. Papa Felipes is a New Mexican restaurant that is NOT open for breakfast but they still have Huevos Rancheros on their menu. In fact, they have TWO versions of Huevos Rancheros. Anyway, the Huevos Rancheros pictured here are at LITTLE ANITAS Restaurant. I rate this version a B+ because the meal is excellent with hash browns that are not too greasy, flavorful refried beans, and the two eggs cooked just as I like them and they have the corn tortillas on the bottom of everything which I prefer over flour tortillas on the bottom, but I prefer Huevos Rancheros with whole beans and papitas. Although this version comes with hash browns instead of papitas and refried beans instead of whole beans, I will continue to eat them here because Little Anitas is a restaurant that participates in the Delta Airlines Frequent Flyer Sky-Miles Program 🛫🛬. In New Mexico, most traditional meals will include the question ;"With red, green, or christmas"?. I ordered this Huevos Rancheros with christmas style of chili sauce. The red chili sauce is closer to me and the green chili sauce is on the far side of the plate.

This is one of my favorite versions of Huevos Rancheros and it can be found at CHURCH STREET CAFÉ. This version comes with whole beans, papitas (can really not be seen here because the tortilla was placed on top of them), and corn tortillas underneath everything else. In fact, as an added bonus, the corn tortillas are BLUE corn tortillas. The red chili sauce is really good here. This restaurant is featured on my FAVORITE RESTAURANTS page because it is one of my favorite restaurants in Albuquerque, being housed in one of the oldest pioneer homes of the Old Town neighborhood. These Huevos Rancheros are an absolute A+

A restaurant that participates in the Delta Airlines Frequent Flyer Sky-Miles Rewards Program and also has its own rewards program.

Here is a view of part of the dining room at PAPA FELIPES. My appetizer of Guacamole, the chips and salsa, and the Margarita have already arrived. These are all traditional to New Mexican cuisine and many New Mexican restaurans will give a free basket of chips with salsa automatically.

At PAPA FELIPES' you can get several versions of Huevos Rancheros because they will ask you more than how you want your eggs cooked and what chili sauce you want. You can choose what two sides you want and the choice will be from several possibilities like Papitas, Whole Beans (the two I have here), Mexican Style Corn, Spanish Rice, or Refried Beans. I also rate this Huevos Ranchers a B+ because, although all the ingredients are very delicious here, their version comes with the flour tortilla on the bottom and I prefer the corn tortilla. At least the flour tortilla was folded up so it did not get soggy which is something they will do if they are covered with all the ingredients which is something you do not want 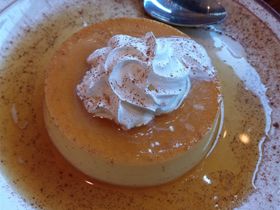 Many New Mexican restaurants will also serve Flan because it is very traditional to Latin American cuisine. It is a custard made with milk, egg, and some kind of sweetener. The sauce on top is a caramel sauce. The milk is usually a condensed milk that may already have the sweetener in it. Cinnamon is also usually sprinkled on it. As you can see here, there is Cinnamon sprinkled all over the flan and the plate. .

This is another version of Huevos Rancheros that can be found at FRONTIER RESTAURANT. Frontier Restaurant serves Huevos Rancheros all day. This restaurant is not strictly a New Mexican restaurant but they do have a section of the menu that is dedicated to New Mexican cuisine. This is a much loved restaurant with locals and tourists alike. It is across the street from the University of New Mexico main campus and has been here since I first moved to Albuquerque. The address is 2400 Central Street NE. Many believe that the best green chili sauce in Albuquerque will be found here. This very likely is the case because I always eat my Huevos Rancheros with green chili here although I almost always prefer red chili sauce on New Mexico food. I did try Huevos Rancheros here with red chili but it did not stand out as better as compared to other places so I stick to their green chili here. It really is especially good. Corn tortillas are used under all the other ingredients, just as I prefer. No potatoes at all are included with this version but that does not bother me because there are plenty of delicious whole beans included. There is also a large, homemade tortilla included. If you eat here, you can watch them cook the tortillas on a tortilla making machine. The machine is at the end of the counter where we order what we want to eat and drink. I rate this version with an A.

TWISTERS is the only fast food restaurant I eat at in New Mexico. It is the only fast food restaurant in Albuquerque that participates in the Delta Airlines Frequent Flyer Sky-Miles Rewards Program. They are also a regional restaurant local to New Mexico. Being regional to New Mexico, they specialize in Breakfast Burritos which are very popular in New Mexico. They have 12 Breakfast Burritos on their menu and you can also "Build Your Own" burrito. I always get the basic burrito with beans added. I also always get a Mango Smoothie with it. Mangos are a fruit that are much loved in Mexico and New Mexico. The Mango Smoothies are very good at Twisters..

This is inside Garduños Restaurant. There are two or three branches here in Albuquerque and there used to be one between Las Vegas Nevada and Henderson Nevada but I do not know if that one is still open after COVID 19 pandemic. There are at least two branches in Albuquerque though.

And this is the GARDUÑOS RESTAURANT version of Huevos Rancheros. The unusual thing about these Huevos Rancheros is that the corn tortillas are not completely covered with the ingredients on top and the red chili sauce that I ordered with them. The red chili sauce was really good but geared very much for the tourists because there is no heat factor at all. Their chili sauce is very mild. I am rating this version at only B- because I do like some chili heat and I prefer papitas to hash browns and whole beans to refried beans. Also unusual are the scrambled eggs. I always order the eggs over medium but I may have accidently ordered them scrambled.🤔

This is a New Mexican breakfast called Chilaquiles. It is a simple and inexpensive meal that can be found in a few places like LITTLE ANITAS' where I am now. It is made with "flash fried" corn tortilla chips smothered with red chili, two eggs done like you want them, white cheese, and refried beans (queso blanco, dos huevos, y frijoles). The flour tortillas and sopapilla came automaticaly with the meal. I ate the sopapilla with honey as a dessert..